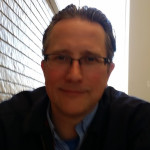 I’ve been a professional digital artist in the advertising industry for almost 20 years. I’ve primarily made my living doing animation and motion graphics, but I also have done a lot of illustration, cartooning, photo editing and video editing work. It is conceivable I may have built more banner advertisements than any other person alive. Many of the ad campaigns I have worked on have been seen by millions of people.

I’m a founding member of The International Cartoonist Conspiracy. My comics have been featured in numerous anthologies and gallery shows, as well as in the Hot Ink: Comic Art show at the Minnesota Museum of American Art. I am also a featured cartoonist in the book Superheroes, Strip Artists, and Talking Animals: Minnesota’s Contemporary Cartoonists by Britt Aamodt, published by the Minnesota Historical Society. I regularly post webcomics, I have created numerous comic books, and I’ve regularly collaborated with other artists to create comics anthologies and jam comics.

I’m also a game developer. SQUIRMISH: The Card Game of Brawling Beasties is a game I designed and illustrated that was recently published by Gamewright. I am currently working on an expansion and a video game adaptation of it (in collaboration with Faust Logic).

If you have an opportunity you think my skills might be a good fit for, I’d love to hear about it. You can email me at sstwalley(at)gmail.com.