Here are some banner ads for the St. Paul and Minnesota Foundation I made recently for Whittier in collaboration with their creative director Montana Scheff.

A few years ago, I started working regularly at Wunderman Thompson, primarily making HTML5 banner ads for Best Buy… and I’ve made well over a thousand of them at this point in collaboration with many other designers (such as Ben Eaton, Christopher Jacques, Heidi Keller, Christopher Marble, Megan Berray-Larsen, Jordan Rohweder, Rob Weaver, Elizabeth Hauck, Brandon Peshern and Scott Pfeil) and animators (Mark LaCroix, Keldon Ancheta, Ron Wening, and Kevin Robertson). Here is a (very) small sampling of that work.

I recently built some fun HTML5 banners for Kung Fu Panda and Fruity Pebbles breakfast cereals in collaboration with creative director Brian Hurley and designer Erin Julin. Grab a bowl and a carton of milk and view some of them at the links below.

Along with these projects, I also built a fun little Fruity Pebbles New Years video in collaboration with Brian Hurley and Chris Henderson for the client’s social networking purposes on the holiday, which you can view below.

Pull up a chair, youngsters, and let me tell you about when I started making flash banner ads… back when there was a 30 kilobyte limit! Yes, you heard me right, you had to fit every bit of banner juice you had into the wee thimble of 30 kilobytes. It eventually crawled up to a fat 40 kilobytes, causing much celebration and unrealistic hailing of a new day… and there it remained for over a decade.

In these days of supercomputers in your pocket and cars that drive themselves (drive THEMSELVES! Where do you suppose they go?), HTML5 banner ads have largely replaced flash ones, and necessitated vendors re-examining file size… they seem to be settling around 150k-200K for them. Which is great… but…

40 kilobytes was not a lot to work with. But working within limitations can be fun. Here are some examples where I felt I won the 40k challenge in a big way, stuffing these suckers’ little kilobytes to bursting like a goddamn Thanksgiving turkey.

Flash is going the way of the dinosaur in a little while here, so I’ve converted them to video… and now they are no longer clocking in at those teeny little file sizes. They don’t look as good as they used to, either, lacking Flash’s vector crispness. Progress!

I assure you, this stuff was pretty impressive back in the day. I guess you had to be there. 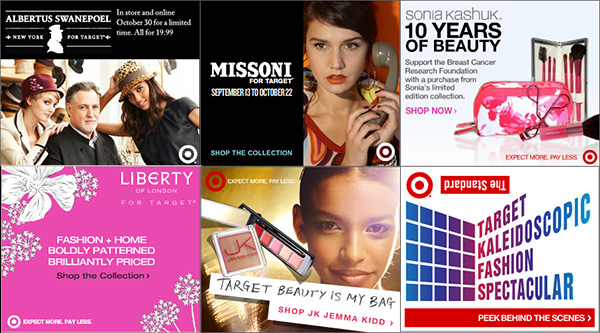 Although my personal idea of fashion veers towards Hawaiian shirts, I worked on a number of banner, rich media and other campaigns selling the work of the many designers that Target collaborates with. Below are a handful of examples of the many Target fashion and design-related Flash banners I built (now converted to .mp4… RIP Flash). These were all built in my time at Olson, and were made in collaboration with a number of talented designers there (such as Tate Leyba, Montana Scheff, and Kristen Hasler).

I had a number of Flash projects where I had the opportunity to animate illustrations of Target’s canine mascot, Bullseye, for banner ads, rich media and websites… generally under the unforgiving limit of 40 kilobytes or less (unfortunately, I am not aware of who did the charming illustrations these animations were based on). I think I did a pretty good job of breathing life into the cute little corporate shill. You can see many examples below.